Living off-grid: but cables are still key to self-sufficiency 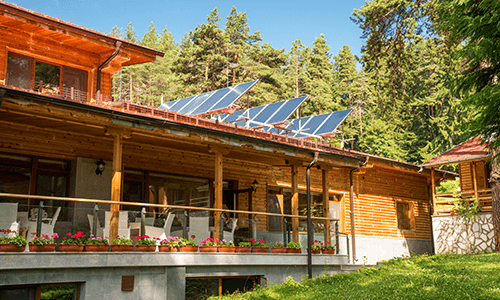 New Zealand is apparently no longer just home to Hobbits, a world cup winning rugby team, and sheep – tech billionaires are apparently setting up residence there too. It seems as if those who seek to plan for doomsday or simply want somewhere off-the-grid are looking down under as the ideal place to be. Peter Thiel, the founder of PayPal, is the latest in a line of people to buy up large estates in the beautiful New Zealand countryside. Apparently there are 92 super-high-net worth people who have been granted citizenship and hold property on the North or South Islands – many of whom see living there as a way of disconnecting from the world around them.

But what are the challenges of off-grid living – it’d take a big adjustment for anyone but surely it’d be a complete sea-change to go from running a multi-national corporation to growing your own vegetables.

Water collection – if there’s not a freshwater stream running through the property you’re lucky enough to own, then you have to figure out how to collect water. On a small scale (ie: for one residence) the most practical solution is probably to collect rainwater. New Zealand has between 600mm and 1600mm of rainfall each year so if it’s collected efficiently in barrels or in water tanks it can be used both in the home and to water vegetable patches in the garden - the location would depend on whether it needs purifying through a water filter (if it’s close to ground contaminants then it would do). If you’re sited close to the sea there are also small-scale desalination options – much like the larger water treatment plants – taking saltwater and turning it into potable water. When you have potable water you then need a water pump, powered via rubber flex cable suited to being submerged, which would then propel it around the house, from showers in the bathroom to taps in the kitchen, and through boilers for central heating systems.

Electricity – your average tech billionaire is not going to want to give up all his gadgets just because he’s suddenly living off-grid and that means sourcing electricity from renewable means – solar panels connected with the PV1-F photovoltaic cables, and wind turbines connected by MV cable being the most obvious, but also ground source heat pumps, and hydro turbines for where there’s a year-round stream. You can even use a biomass stove. Using LEDs instead of incandescent lightbulbs saves lots of energy too, drawing less electricity from the PV panels. New Zealand is already ahead of the game here, with 40% of primary energy coming from renewable sources and 80% of electricity generated through hydropower and geothermal. These will all help you become self-reliant but they all need to be installed and connected so there’s a broad range of cables required.

State-of-the-art homes – Nowadays off-grid doesn’t have to mean basic. For purists, off-grid is an all or nothing state, but for many, providing you’re seeking a neutral carbon footprint rather than to completely shut off from external communications and provided you can generate enough electricity (which with enough renewable energy capture methods you can do) then smart homes are, it can be argued, even more important to making off-grid living manageable. Once the fixed wiring is installed, then smart controllers allow everything from heating, lighting and home security to home entertainment and connected domestic appliances to be adjusted and controlled. Yes, it does in theory mean that you’re ‘connected’ with tablets devices connecting multiple rooms across a local area network, but surely you’re still allowed to dim the lights, turn up the thermostat, and watch your favourite TV box-set?

After that, it comes down to growing enough food to sustain you and your family, or creating something of value to barter locally. The average tech billionaire can probably afford to still have their food flown in and to stockpile enough rations to see themselves through but most off-gridders want to live off the land around them. It’s not an easy lifestyle to choose – and it’s certainly not for everyone. Luckily, for those people who dream of self-sufficiency (or maybe just lower energy bills), there are systems on the market that can help achieve this to a degree without completely overhauling your lifestyle. Perhaps start with some solar panels on the roof of your home and take it from there?