EV Numbers Around the World 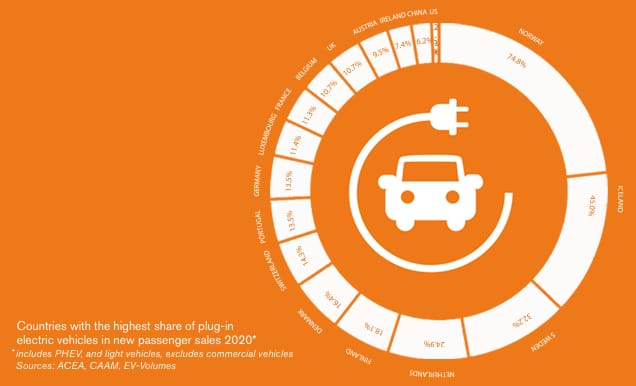 The EV market continued to grow throughout 2020, in spite of all the challenges the year posed. According to the industry tracker EV-Volumes, electric vehicles accounted for 4.2% of light vehicle sales in 2020, almost double from 2.5% in 2019. Without the global pandemic one would hope those growth figures would have been even higher.

But which countries have the most electric cars? Our infographic rates countries by percentage of EV & PHEVs as of 2020.

So what do the statistics say? Norway is leading the way with 74.8% share of plug-in electric vehicles, including plug-in hybrids and light vehicles. Other European countries are not far behind with Iceland having 45%, Sweden 32.2%, and the Netherlands 24.9%.

So why exactly is Norway leading the way? Norway’s policy measures such as tax exemptions, toll exemptions and other incentives have been highly effective in promoting electric cars. However, this model can’t be as easily applied to other countries. For example, by waiving tax duties for electric vehicles, Norway are effectively subsidising EV purchases at a level that a larger country such as the US couldn’t afford to do. Secondly Norway is comparatively a very wealthy country with a high level of domestic income - according to Norway's national statistical institute the country’s median household income after taxes was around $54,000 in 2018, which is roughly on par with the United States but more than twice as high as the EU average.

But it’s not just the average annual income that plays a part; it appears affordability is big factor when it comes to purchasing an electric vehicle. For example, the average price in the US is around $55,600 whereas the average price of a standard vehicle in Norway is just $36,000. That is expected to come down as more and more manufactures coming into the game. Ford, like a number of other major automotive manufacturers, have announced that its entire range will be all-electric by the end of the decade. It will help make electric vehicles even more accessible.

Government initiatives and subsidies will undoubtedly help uptake in EV ownership, as will a wider growing environmental consciousness, as will disposable income. Yet the figures for % ownership have one final factor to add into consideration – population. 74% of vehicles on the road of one country is not the same in real figures as another country.

So where are the real numbers of EVs on the road? Well, perhaps unsurprisingly, this is where China and the major European countries come to the top of the list. It’s still a small percentage of the total number of vehicles on their roads but by sheer volume it’s a sizeable number by comparison to Iceland. Norway still does well by comparison, it’s the USA where the numbers are noticeably lagging.

So in conclusion, whilst Norway should still be applauded for its EV adoption, let’s not ignore the large number of people all around the world who have adopted and are embracing e-Mobility... and continue to encourage the development of the infrastructure and technologies that make electric vehicles a viable and sensible choice for all drivers.