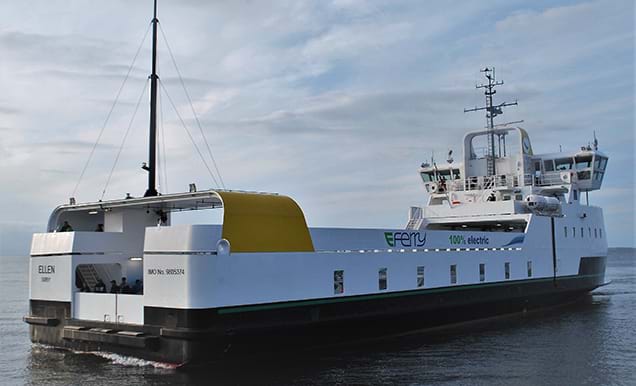 What do you get if you cross 57 Tesla batteries with 200 people and 30 cars? Thankfully it's not a joke (we're not great at those) - it's actually the world's largest all-electric ferry. The Ellen e-Ferry sails between the Danish island of Ærø and Fynshav on the mainland, and has just been recognised as the leader in the transport and mobility category in the 2020 European Solar Prize awards run by Eurosolar, a non-profit organisation that advocates for renewable energy.

The e-Ferry uses a combination of renewable energy, batteries, and electric motors to traverse the 20km route, and whilst this is only a short distance in terms of the distances covered by marine traffic, it is an encouraging example of what can be achieved in a sector that currently relies on heavy marine diesel for power. According to figures in a recent BBC report and Ship-Technology.com, Ellen will help cut 2,000 tons of CO2, 41,500kg of NOx, and 1,350kg of SO2 every year. Ellen e-Ferries also estimate that more than 70% of Europe's ferry routes could be converted to use electrically powered boats.

Denmark has built a strong history of embracing renewable technologies with around 80% of it's energy production from sustainable sources - nearly 60% of which was wind power, mostly from offshore. In late 2020 Reuters News Agency reported a funding deal to put 775,000 electric vehicles on the road by 2030 - a sizeable increase on the 20,000 estimated to currently be on Danish roads.

As for the Marine industry, battery technology might not quite be ready to electrify long-haul ferry and shipping routes, but as energy density in cells improves that may soon become a reality. The challenge will remain in finding ways to protect these e-Mobility technologies from the elements - and saltwater is highly corrosive for cables and batteries - but there's no reason why the ferry industry, amongst many others, can't embrace the move to a cleaner and more sustainable way of operating.