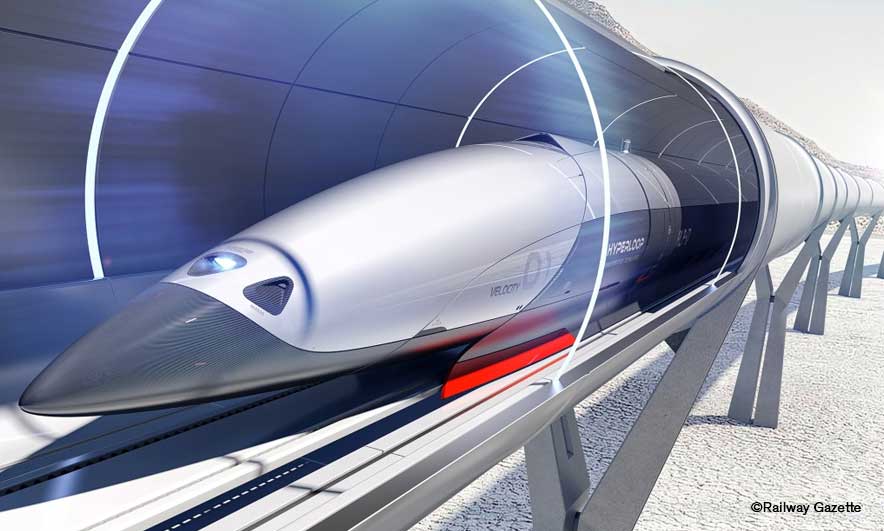 In a global feat of engineering collaboration, could the Hyperloop  be the “greatest leap in transport infrastructure” and the fastest way to travel across the surface of the earth?

Back in August 2013, Elon Musk of SpaceX and Tesla released his Hyperloop concept as open source material, releasing a 57-page white paper available to the public. Interest quickly sparked and inspired thousands of engineers to start developing the concept further. The design has now evolved from Musk’s initial concept, with two major companies leading the way – Virgin's Hyperloop One and Hyperloop Transport Technologies.

The shared essential design consists of pressurised passenger pods moving through vacuumed steel tubes via magnetic levitation and electric propulsion. Creating a vacuum inside the steel tube removes air resistance and magnetically levitating the passenger pod away from the track alleviates friction - the two main factors affecting vehicles today. With virtually no resistance, the passenger pods can travel up to an expected 760mph+ (speed of sound) using minimal energy.

To put its capabilities into perspective, train journeys such as Los Angeles to San Francisco, spanning some 559+ miles and commonly taking 3 hours, would be reduced to just 30 minutes.

In May 2016, Virgin, the current Hyperloop leaders, launched The Virgin Hyperloop One Global Challenge to source proposals for the best and most beneficial routes around the world. Over 2600 teams entered, producing 10 winning routes. The UK holds two of the winning routes with a proposed 414 mile line between London and Edinburgh capable of reducing travel time from a 7hr drive, 4hr train and 1hr20min flight to an astonishing 50 minutes Hyperloop trip. The second route known as ‘The Northern Arc’ get its name from the curved path of transport which aims to connect Liverpool to Glasgow with stops at Manchester, Leeds and Newcastle-Up-On-Tyne along the way. Other locations set to benefit are Canada, US Rocky Mountain, US Florida, US Texus, US Midwest, Mexico, India and a large-scale vision of European connections. All proposed lines are undergoing studies to determine feasibility as we speak.

In 2016, Crown Prince of Dubai Sheikh Hamdan bin Mohammed bin Rashid Al Maktoum also agreed to evaluate a potential Hyperloop One link between Dubai and Abu Dhabi expecting to relieve a 90-minute congested commute down to just 12 minutes. Earlier this year Virgin Hyperloop One introduced their hyperloop pod to the public of Dubai, demonstrating that the rate of adoption and development is moving as fast as the hyperloop technology itself.

Excitingly, the first hyperloop will actually be built in India, with the Chief Minister of Maharashtra having signed off on a Framework Agreement in February this year. 26 million people stand to be connected between Pune, Navi Mumbai International Airport, and Mumbai, with a journey time of just 25 minutes. Virgin say the route will transport passengers and cargo, “capable of supporting 150 million passenger trips annually saving more than 90 million hours of travel time”. They also estimate that this development will create $55 billion social-economic benefits as a result of time and operational cost savings not to mention accident reduction out on India's notoriously busy roads.

As we embrace these new technologies, so the possibilities for wider 'revolution' grows. Companies will, in theory, be able to source their workforce from further afield as daily travel times fall; urbanisation and the infrastructure it brings will spread too, with new technologies across renewables, data transmission and water treatment used to aid the spread of towns and cities. The ways in which this technology could affect our world are endless, limited only by our imagination. Of course, it will be a long time before steel wheel trains are completely replaced, and people will be reluctant to prise themselves away from their cars, not to mention the health and safety permutations that will need to be explored before it becomes commonplace for travel, but we're taking another big step forward into the realm of science reality rather than science fiction.