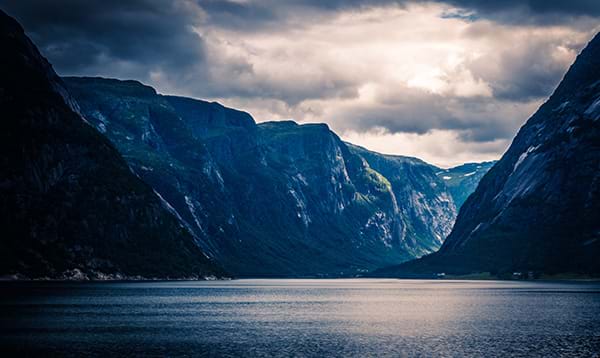 The Arctic Circle - cold, remote, and populated by polar bears and the occasional scientist. That's set to change (a little) with planned construction of the world’s largest data centre. Why choose such an inhospitable place, you ask? An estimated one third of a data centre's energy consumption goes towards cooling the banks of servers, so the naturally cool climate can help substantially reduce this.

But taking a closer look, the location isn't so left-field and has been chosen for more then just the low temperatures. The datacentre will utilise the significant fibre optic cable network already laying alongside a railway previously used to transport iron ore from a Norwegian mine into Sweden to transmit data in (and out) of the facility. Located in the Norwegian town of Ballangen, situated inside the Arctic Circle beside Ofotfjorden and Efjorden, it will be surrounded by water on three sides, providing a greater degree of physical protection as data security still needs to consider non-cyber-related threats. There has also been recent investment by the EU and Norwegian government in building dams in the area for hydroelectric projects allowing the datacentre to take advantage of this renewable power source to help reduce energy costs. The cool, clean water of the fjords, coupled with passive cooling provided by the natural climate, will help keep costs down and avoiding artificially chilling the servers. Lastly, there are several windfarms nearby for supplementary energy sources. In all, it means this secure site with its power-guzzling requirements can be completely powered by renewable energy.

This use of renewable sources is essential when you realise the facility is set to draw the largest amount of power ever required for such a project. Initially this has been estimated at 70mW (megawatts), but in the coming decade the plan is to add enough servers to draw on more than 1,000 megawatts for this single site alone. The data centre itself will be four storeys high and cover 600,000 square meters when completed, completely filled with servers processing and storing information 24/7. This might seem huge, but with the ever-increasing demand for always-on data, and the technological advancements of the Internet of Things with millions of sensors generating information to be processed, the need for such sites will only become greater. Luckily for those living in Ballangen, their quiet town won't be completely overrun by a sudden influx of new residents as so many of the processes are automated and remote monitored. For now at least, the polar bears, scientists (and Norwegians) and carry on as normal.