The purpose of the wear resistance test is to demonstrate that the extruded oversheath of a flexible cables will withstand the wear and tear anticipated with being repeatedly moved and flexed. The test and apparatus used is designed to comply with the standards IEC 60245-1 clause 5.6.3.3 and IEC 60245-2 clause 3.3 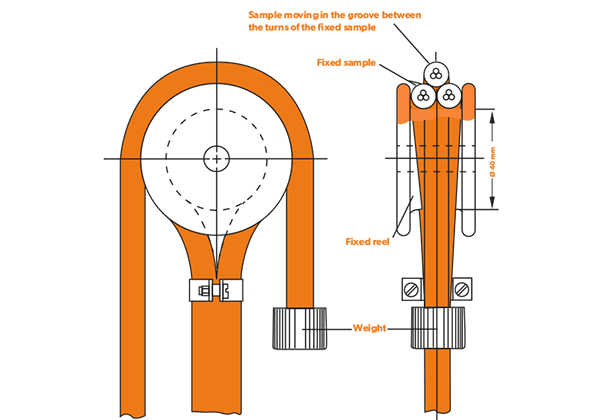 The wear resistance test is conducted on samples from three sets of pairs of flexible cable, each sample having a length of approximately 1 metre. In each pair one sample is wound so as to give nearly two turns on a fixed reel with a diameter of 40mm - the distance between the flanges of the reel being such that the turns are in close contact with each other. The sample is securely fixed to prevent any movement relative to the reel. The remaining sample is then placed in the groove formed by the turns and a 500g weight is attached to one end. The other end is free to be moved up and down over a distance of 0.10m, at a rate of about 40 single strokes per minute for a full cycle of 20,000 strokes.

On completion, the insulation of the fixed sample shall not be visible over a total length of more than 10mm. Following the test, the fixed sample is then subject to a further voltage withstand test of 2.5kV in accordance with IEC 60245-2 clause 2.2, applied between the conductors and water the cable is immersed in to ensure it continues to deliver the electrical continuity and performance required of it.

View our range of power, data, control and instrumentation cables and cable accessories