Conductor Resistance cable testing is undertaken on either on a complete length of cable or on a cable sample of at least 1m in length and measured in accordance with BS EN 60228. The test determines the DC resistance of of Class 1, Class 2, Class 5 and Class 6 conductors for plain copper, metal coated copper, aluminium and aluminium alloy, circular or shaped. The standard specifies the nominal cross-sectional area, in the range 0.5mm2 to 2500mm2, and the results are expressed in ohms/km. 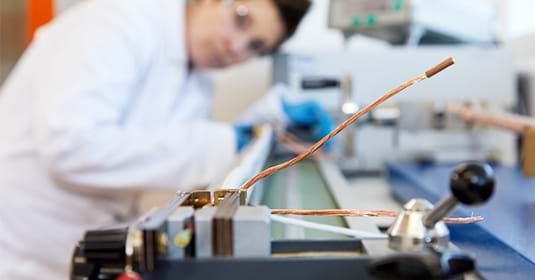 Traditionally the conductor resistance test equipment is either a Kelvin Double Bridge or a Wheatstone Bridge, using the principle of balancing the voltage across known resistors to determine the unknown resistance. Modern equipment has been developed which determines the cable conductor resistance through the principle of Ohms law, calculating the current and voltage across the sample, and from this determining the resistance.

Accuracy for this cable test is typically in the region of 0.2 to 0.5%. A formula is used to correct these measurements to 20°C and the results are then compared to the standard for each conductor type and size.

Conductor resistance is a key cable test as conductors with too high a resistance pose a safety threat. When current passes through a conductor the inherent resistance causes a heating effect - if the resistance is too high the heat of the conductor may cause the premature failure of the insulation which may in turn result in a fire or short circuit.

Tailoring cables to meet bespoke requirements of performance or environmental challenges when off-the-shelf options are unavailable.