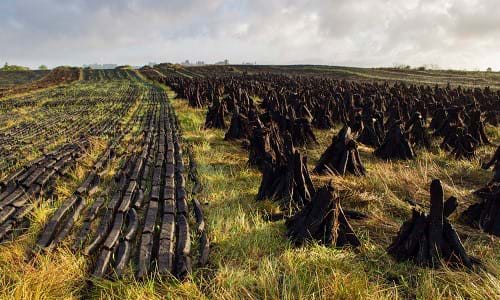 For at least 1,000 years, Ireland has been relying on its abundance of peat for everything from flavouring its whiskey to fuelling its homes. Peat makes up 6% of Ireland’s energy supply. It is cheap, abundant and easy to harvest. While peat has many things in its favour, Ireland is looking towards wind energy as a renewable replacement in the future.

Peat shares many qualities with biomass renewable energies in that it stores energy that can be burned to create electricity. It is also an extremely efficient carbon sink, meaning that is absorbs more CO2 from the atmosphere than it releases in the same way a forest or ocean does. But peat is far from being a clean source of energy. It is a dirty fuel when it burns, and actually has carbon emissions beyond that of coal. This is because in addition to the carbon created from burning, the stored CO2 is also released, making it 23% more carbon dioxide heavy than coal. This is unsurprising given that peat is often the first step in the formation of fossil fuels like coal.

This is one of the reasons why Ireland is turning towards wind for a cleaner source of energy. Reliance on wind energy in Ireland has increased significantly in the past decade. In autumn 2017, Galway Wind Park, the largest offshore windfarm in Ireland, is scheduled to be completed. When running at peak capacity it will have the ability to supply around 3% of Irelands average fuel needs. Overall, wind energy provides approximately a quarter of Ireland’s electricity, and more projects are planned to increase this number in the coming years. But the problem Ireland is facing with wind energy is the same one that many countries are encountering – inconsistency. Wind energy experiences peaks and troughs – some days are naturally windier than others are – and the question becomes what to do when you have too much or too little wind.

The more consistent fossil fuel alternatives are still needed to fill the gaps, and battery storage is an option to store excess electricity to be used in low production periods. However, for excess energy there is another option available – export. Denmark is already setting the example for wind export; they have the highest proportion of wind power in the world and regularly export excess production to their neighbours in Norway, Sweden and Germany via cable connections. Similar cable connections exist between Ireland and England, and another connection is proposed by Irish company Eirgrid to continental Europe.

These cables are not only critical for connecting the renewable energy source and the primary grid, but also for creating these possibilities for import and export. Our renewable energy cables play a key role in the UK for generating power in a number of high-profile land-based and offshore wind farms, including Gwynt y Mor.

As we turn away from traditional sources of fuel and windfarms become more vital to energy supply in countries like Ireland, the cable and connections will become more necessary and critical to reliable, consistent electricity for everyone.