China's Modern Silk Road and the machinery that's building it 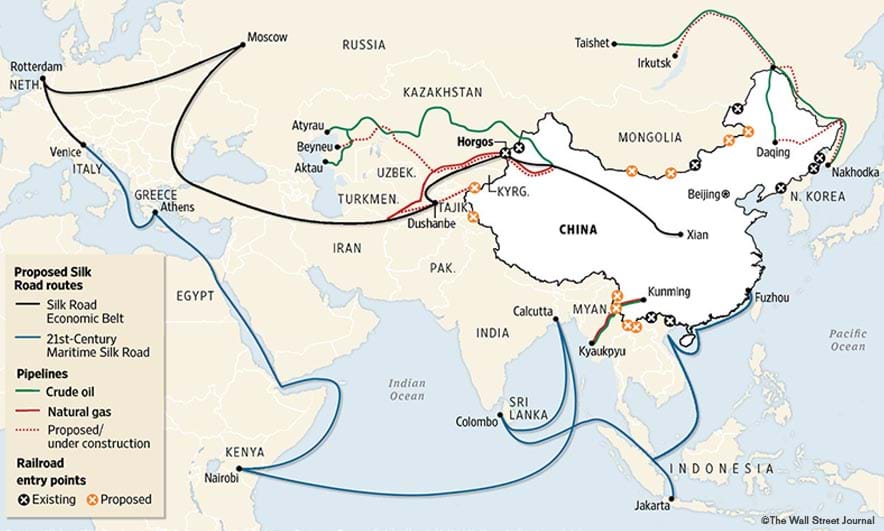 Back in 2013, China’s President Xi Jinping presented the Belt and Road Initiative. It set out to connect 65% of the world’s population to China by creating a network of sea routes and land links. Costing an estimated three trillion dollars - that's $3,000,000,000,000 - over the lifetime of the project, it's been described as the world’s largest ever transport expansion.

Historically, the Silk Road was the main trading route between East and West, running from China, through Central Asia, and into Europe. This trade of valuable silks, gemstones and other goods was over land, whereas the spices from the Indian subcontinent travelled by sea. Fast forward a couple of centuries and China is aiming to create links that cover a modern silk road economic belt and a 21st century maritime silk road (hence the name). The land-based silk road will connect Mongolia and Russia to the North; South-East Asia, India, Pakistan and Bangladesh to the South; and central Asia, West Asia and Europe to the West. The maritime route includes harbours and coastal infrastructure going from the Chinese east coast to Europe, India, Africa, the Pacific, and the Indian Oceans.

With the economic boom in China slowing down, the Belt and Road Initiative is created as an economic vision to lift the Chinese economy going forward. It is intended to connect major economies in Europe and Asia through infrastructure, trade and investment. In doing so, it will open new markets for Chinese goods and technologies, and support domestic markets for manufacturing in steel and heavy equipment. They aim to connect 70 countries across the sea and land route, and the Chinese government has earmarked trillions of dollars to loan to these connected countries in order to support there own infrastructure builds. It will also mean China has influence in energy deals including oil and gas pipelines and other collaborations across the regions - a resurgence and independence from the traditional Chinese/US trade agreements.

This mammoth modern-day trade route is an enormous undertaking and new technologies and bespoke machines have been designed to help speed up the process. Among the extraordinary machines are:

Through the planned Belt & Road investment, we could see countries such as Kenya and its neighbours eventually being closely connected to the heart of China. It will streamline and speed up the shipment of goods to aid manufacturing; it will aid the urbanisation of more remote locations through improved transport links which in turn provide investment and employment opportunities; and it will see sustainable energy solutions such as wind turbines and solar plants created to help support the demands of these areas.

There will always be detractors and opponents to the plans - countries that question intentions or are concerned for their own place in the global trade balance - but regardless of the politics, a better connected world can only be a good thing.