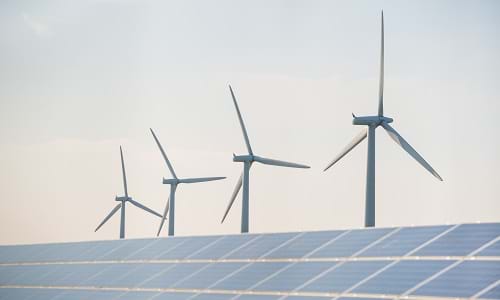 It is widely accepted that renewable energy sources are the way forward for a sustainable future. But it’s also no secret that renewable energy suffers from ups and downs. Some days are windier or sunnier than others, and the highs and lows create inconsistency that make renewables less reliable as power sources than fossil fuels. But the future is bright and there are constantly evolving ideas and technologies to combat the problem.

There are several problems associated with inconsistent energy, the most obvious one being that it’s unrealistic to provide unreliable electricity supply to consumers who expect it 24 hours a day. To balance this, renewables work in concert with conventional energies to fill the gaps and create a consistent supply. But there is only so much “space” in the grid for energy, so excess energy needs to be curtailed or stored. Not all power can be easily “turned off” – nuclear for example takes time to shut down, whereas hydro is relatively quick – so the curtailment often falls on renewables. Quite counterproductive to the goal of green power supply. An oversupply of energy when there is nowhere for it to be used or stored can mean energy is created and then wasted, or worse, it can cause failures in the gird.

One of the ways these issues are being addressed is by exporting excess energy when it is created. In places like Europe, this is a viable system and has already shown to be effective for countries like Denmark and Germany. Renewable cable connections provide integral links between neighbouring grids, allowing the trade of energy when for example a windfarm experiences a peak day like Denmark did in 2015. Interconnectors allowed 80% of the power surplus to be shared between Germany, Sweden and Norway.

But such connections are not always geographically possible. Countries like Australia are unable to share power as easily due to their isolation, and equally because the country itself is so big, often sharing between states is even a challenge. This is where storage comes into the equation. While not yet a widespread solution, companies like Tesla are working on making industrial and private storage of renewable energy a reality. Their batteries give homes and businesses the potential to run on solar power battery reserves created and stored on peak days. Tesla have even offered to help Australia create battery farms for its South Australian power grid, in addition to other companies also biding to do the same thing. Battery plants could be a way to make renewable energy a reliable alternative. Additionally, with the lowering cost of solar panels, photovoltaic cables and connections, private batteries could also be a way to make it economical alternative for businesses and households allow them to save or even earn money from the generation of surplus energy.

Researchers in Germany are using machine learning to improve predictive models so they can more accurately plan for when there will be an excess or low in renewable energy input to the grid. Using sensors on turbines or solar panels, the researchers are tracking wind speeds and sunlight intensity and using the data combined with weather station observations to make predictions. Then by measuring the predictions against what actually occurs, machine learning is able to improve the predictive models by looking for patterns. This will help them better plan and coordinate with conventional power stations to adjust their outputs, and avoid wasted energy or the risk of failure that can be caused by an influx of power.

With many countries aiming for ambitious renewable energy goals for the future, it is more important than ever for renewable energy to take the next steps towards becoming a sustainable alternative.