Modular construction the answer for the housing supply gap? 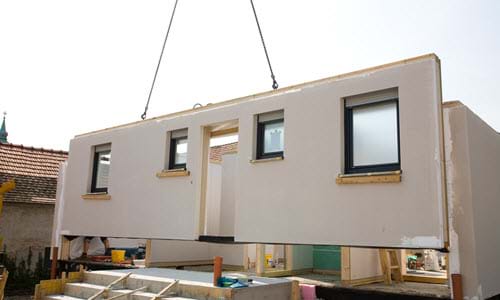 The housing supply gap has long plagued the UK, and traditional building methods have struggled to keep up with demand. Developers are looking to disrupt the industry with modular construction which could be a game changer when it comes to the speedy production of homes. But what about the quality and environmental impact of these factory automated homes, and how will this influence the future of the construction industry?

With the principle aim of producing homes as quickly as possible, it’s easy to understand why prefabricated homes haven’t always had the best reputation. Yet modernisation of the building industry is pertinent and the UK housing market’s production capacity is well below what it needs to be, with an average of 134,000 homes built each year compared to the 200,000 needed to meet government targets. Traditional building methods take time and require skilled labour, which is becoming scarce due to the rapid retirement rate of UK construction workers. Houses need to be built faster and more efficiently, which is where modular construction can step up.

These 'prefab' factory-built homes use modular construction borrowed from industries with high levels of automation designed to raise productivity and output capacity. In the same way the car industry became automated, companies such as Legal & General Homes (L&G) are building modular houses in their factory, transporting them to site and installing them – all in a matter of weeks. While time to build the house varies with size, most estimates suggest building prefabs off-site whilst foundations are being laid on-site cuts the production time by about 50% compared to traditional construction. L&G’s first prototype housing unit was assembled outside their factory in July, with plans to produce thousands of homes per year.

Factory built homes haven’t always had the best reputation but these residences promise to be of a good consistent build quality, highly customisable, and more energy efficient compared to traditional construction. With their precision factory automation, homes are able to be millimetre perfect, meaning they’re more airtight than a traditional build, delivering savings on energy consumption. There is concern however that materials will be largely imported, which adds an environmental impact to transporting the components to site as traditional builds generally use local materials. Another downside is that given the need for site transport and factory production, the homes can often be quite small – L&G’s proposed one bedroom is 26m2 (280 sqft), significantly below the minimum 37m2 required by the national space standards. While the high build quality helps to make the compact space feel more expansive, there is concern over planning permissions.

Yet with further benefits including the reduction in requirement for skilled labour and avoidance of issues faced by traditional methods such as site accidents and schedule disruptions caused by dealing with multiple vendors, companies like L&G hope to revolutionise the construction industry and make housing more accessible. Time will tell if this is the solution to the housing crisis and the future of construction.