The history of the Tube - London's iconic underground network 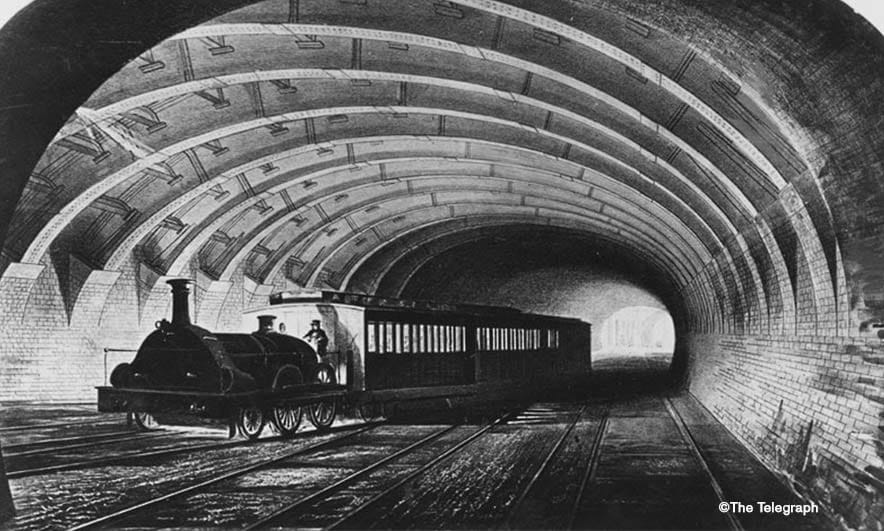 Happy Birthday: The Victoria Line turns 50! Chatting on your phone (on the tube) CES Expo - Are we ready for a truly Smart Car? Go back

London has one of the oldest underground railway networks in the world – one which many of our staff and customers use every day. As a leading LUL (London Underground Limited) cable supplier, we take a keen interest in the 'Tube' and this potted history sparks your fascination too.

It started back in the mid-1800s - London had grown considerably with many people travelling into the capital’s seven railway terminals for work, and the streets were becoming increasingly congested with omnibuses, carts and cabs.  The concept of an 'underground' railway network linking these hubs had originally been proposed some twenty years earlier by Charles Pearson but had been dismissed by the various railway companies as unviable, yet by 1854 the Metropolitan Railway Company was granted permission to build the first underground line at an estimated cost of £1 million. Raising funds was difficult however - the Crimean War was in full swing - and so construction did not start until 1860. The 6km railway opened on 10 January 1863, carrying some 38,000 passengers on its opening day and 9.5 million passengers by the end of its first year of operation -underground travel had caught on!

Originally the underground ran with steam locomotives and wooden carriages, often borrowed from other networks to meet the demand. The first deep-level electric tunnel was not opened for almost another 30 years. The initial plan to cable-haul the trains (to avoid the often uncomfortable smoke filled carriages of steam power) was discounted and 'new technology' in the shape of electrification was deployed on a small stretch which ran from King William Street (close to what is now Monument Station), under the Thames river to Elephant and Castle (today all forming park of the Northern Line). A third conductor rail of +500 volts DC ran northbound and -500 volts southbound to power this section which, by 1907 had been extended north as far as Euston and south to Clapham Common.

In 1901 work started to electrify the District and Metropolitan lines after the two operating companies formed a joint committee and recommended a Ganz three-phase AC system. Ganz was probably most famous for manufacturing tramcars and the system worked using overhead wires.  These plans were however later changed to a DC system similar to that already in use.

The Underground Electric Railway Company(UERL) of London was formed in 1902 but the term 'Underground' didn’t really gain use in relation to stations until 1908. To promote travel using the network, a joint marketing arrangement was agreed that included maps, publicity and ticketing, and so the roundel, the now iconic red disc and blue bar Underground sign, began to appear at stations. In 1912 the UERL took over the London bus and tram companies too, and for the next few years there followed an ongoing battle between UERL and the Metropolitan company with fares being undercut to compete for passengers.

The outbreak of World War I  in 1914 delayed the construction of many of the planned extensions to the underground network, and saw many traditionally male dominated roles being taken on my women including: guards, clerks, painters and cleaners. London experienced the first air raid in 1915 and the underground was naturally used as a bomb shelter. This was repeated again during the Second World War (1939-1945) with pictures of women and children camped out awaiting the all-clear now depicted throughout history books. Some 175,000 people a night were seeking refuge in the stations in August 1940 during what became known as some of the worse nights of the blitz. Other parts of the network were commandeered by the war office, with Brompton Road becoming an anti-aircraft control room, Sir Winston Churchill and the War Cabinet using Down Street Station with the Railway Emergency Committee, and the Central Line being converted into a fighter aircraft factory over 2 miles in length.

The work to electrify the Metropolitan Line was only restarted in 1959. Britain’s railway network had been nationalised in 1948 and the British Transport Commission (BTC) formed but the priority had been the reconstruction of main railway lines which led to the delay in some of the reform of the underground system. A 1949 report recommended the creation of the Victoria line and some experimental tunnelling began in 1959, with construction finally commencing in 1963 before the official opening in March 1969. The Jubilee Line, named to mark Queen Elizabeth II's silver jubilee in 1977 was one of the later lines to be finished - only opening officially in 1979.

Today over 1.265 billion passengers use the Tube, and the network is still expanding, with the introduction of the Crossrail programme, officially known as The Elizabeth Line set to open in Autumn 2019. The line will connect 41 stations and is expected to carry some 200 million passengers a year.  So when you're next on the tube - whether in London or around the world (there are many) - think about the amazing feats of engineering it takes to create an underground train network including the kilometres of cables which are needed to deliver power, control and monitoring systems.

- Every week London Underground escalators travel the equivalent distance of going twice around the world (and there are 167 of them in operation).

- It's the third largest metro system in the world (in miles) behind Beijing and Shanghai, at over 250 miles long, and the third busiest in Europe behind Moscow and Paris.

- The average distance travelled by each tube train annually is c.114,500 miles, at an average speed of 20.5mph including station stops. The highest number of trains operating at peak service on the Northern Line (91)

- You can no longer go around the Circle Line in one long circle. As of 2009 it terminates at Edgware Road and you have to switch trains.