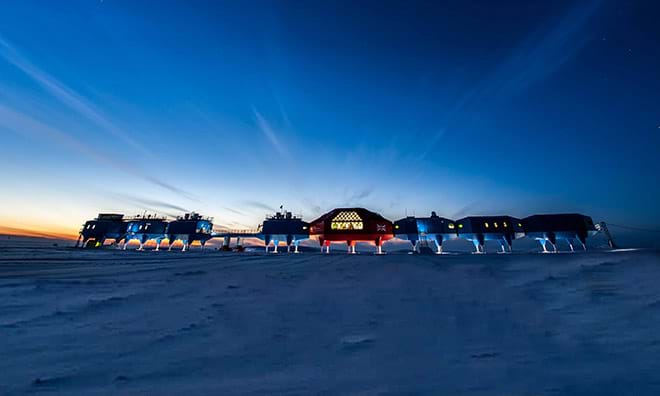 The new 2030 EU Renewables Target Modular construction the answer for the housing supply gap? Machine to build the machine: Automation key to Gigafactory success Go back

For a continent with no indigenous population battered by the harshest of elements, there are a surprising number of people that are based on Antarctica and its outlying islands – around 4,000 during the summer months. 30 countries run research stations all year round, all signatories of the Antarctic Treaty. But things have moved on significantly since Ormond House, the first permanent base, was built by the Scottish National Antarctic Expedition in 1903.

Unlike the Arctic where buildings are on floating ice, Antarctic ones are grounded on rock or fixed ice. It has allowed more elaborate constructions, with reports of the latest design for the Brazil’s Comandante Ferraz research station costing up to $100 million by the time it’s completed in 2018. This state-of-the-art facilities, and those of India, South Korea, the UK, and other countries with a presence there, sustain communities through both their working day and their downtime for months on end, with systems that have to contend with the extremes of temperatures the environment entails. It might be cold in the UK currently, but lows of -89oC is on a completely different scale!

In a place where human life could not be sustained without support, systems including heating, ventilation, energy production and waste disposal need to be provided. Harnessing nature’s renewable power is the modern choice for power generation (although the US’s McMunro station was nuclear powered from the 1960s to the early 1970s) – far more efficient than polar diesel which is still used too but which is polluting and expensive to transport to these out-of-the-way locations. But these renewable systems still require connecting cables and this is where companies like ours get involved. Eland Cables was one of the suppliers involved in the refurbishment of the British Antarctic Survey’s facilities for their biodiversity and climate change study, providing cables with a specially formulated sheathing capable of protecting the conductor and thus the operational integrity of the cable at temperatures of -40oC and below.

The research stations have a limited lifespan, in part due to drifting snow which submerges the facility, in part due to shifting ground, and in part due to the advance of technology and the remit of the research being undertaken. They’re becoming ever more architecturally interesting too, even though they’re seen by very few people, stimulating the senses and improving the lives of the facility staff during their extended stays. It means cables and systems to support their activities will continue to be needed, and we’ll keep pushing the boundaries of what can be achieved in this most remote of locations.

For more information on our British Antarctic Survey work and other project work, see our case studies page.