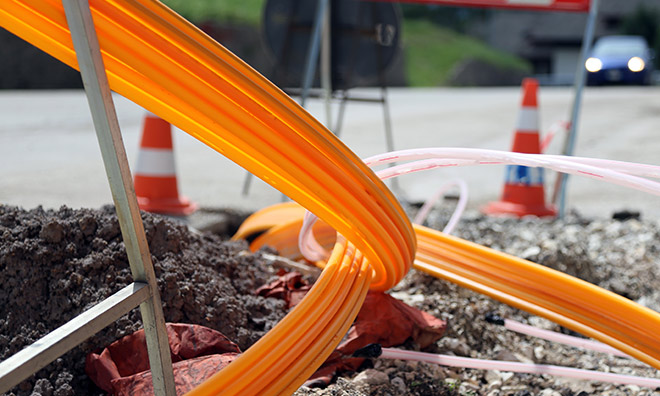 The Chancellor’s Autumn Statement, delivered to Parliament on 23rd November 2016, included provisions for £1 billion of investment into 5G mobile networks and an extension to fibre optic networks. Boosting broadband speeds by replacing the legacy copper cabling for an FTTX fibre optic network will bring benefits to millions of homes and businesses.

FTTX, or Fibre to the ‘X’, refers to the fibre network as a whole – anywhere from its point of origin with the telecoms carrier to where it terminates in a residential or commercial property. Fibre optic cables have a greater bandwidth for data signal transmission than traditional copper or aluminium cables.  There are two ‘modes’ of cable – Singlemode for distances over 100km such as TV and telephone signals where the signal travel in a straight line without reflection; and multimode for shorter distances and where the signal takes a number of paths to the endpoint, allowing for greater volumes to be transmitted.

Typically Britain has lagged behind in rolling out fibre networks as we have such a strong legacy copper network from British Telecom. Until now there’s been little room to overlay a fibre network and even less appetite for the costs inherent in doing so. Yet we’ve seemingly reached the point where superfast broadband is deemed a necessity rather than a bonus – people want to be able to download a film, stream HD TV, and use multiple connected devices all at the same time without having to wait as it buffers.

At the moment, most people who have a fibre connection to their home actually only have it to the nearest telecoms cabinet, or at best to their front door, before it is distributed by the legacy copper cables. New builds may be more fortunate and have ‘full fibre’ but they are the exception rather than the norm. The Chancellor talks of linking 5G mobile networks to these new fibre systems, with the roll-out of this new digital infrastructure set to run until 2021. Changing this will not be cheap and the price we as consumers pay for our connections is already high compared to some of our European counterparts. Investment must be coupled with an affordable service in order to make the most of the opportunities these developments can bring. Time will tell if this proves the case but in the meantime it’s an exciting prospect and a positive step from the Government to keep us as a global leader in the digital age.

We’re working with our customers to provide the cables and accessories to deliver FTTX – click to learn more about our fibre optic cables.