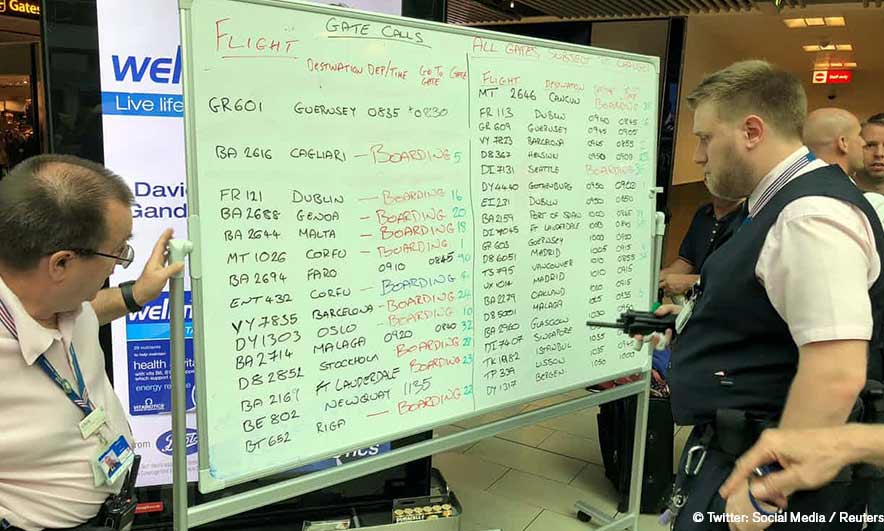 Working in the cable world we tend to like it when wider industry recognise how important cables are to their business, yet a damaged cable hit the news headlines yesterday demonstrating just how reliant we are on these unseen connections. London Gatwick Airport handles over 45.6 million passengers every year on over 282,000 flights, with the vast majority coming and going like the well-oiled machine the airport is. People turning up in the departures hall glance at screens to advise them of check-in zones, before passing through passport control and looking at flight information boards to determine how long they have in duty-free before they need to head for the departure gate. Yesterday, however, didn't run quite as smoothly.

Monday 20th August saw these all-important flight information boards go blank for over eight hours after an IT crash. Inevitably, there were passengers who missed their flights and take-off slots had to be shuffled to accommodate missing people - although the airport was at lengths to say that no flights were cancelled as a result of the data chaos. Gatwick Airport staff dealt with it the only way they knew how - loudhailers and a large whiteboard and wipe-clean marker pens to relay information received over their radios. Tens of thousands of passengers were affected, no doubt many heading off on holiday before their children head back to school. In our digital age they were forced to go 'analogue' - something we're no longer accustomed to.

So how did this happen? It was a fibre optic cable, buried underground, that stood at the route of the problem and any number of things could have affected the cable causing it to stop working. These glass fibre stranded cables use light waves to send data across their length and despite being sheathed in robust materials like UV-stable fire resistant low smoke zero halogen compounds and having the option of armouring through steel wires or corrugated steel tape, they remain comparatively delicate for such a critical information flow. A fibre optic cable with steel wire armouring could be buried directly in the ground, but it is more likely it was in ducts, providing easier ongoing access. The armouring would protect the cable in the event it was accidentally struck by a spade or other implement, but if it's mistakenly pulled up by a mechanical earth mover during civil works then no amount of armouring is going to prevent the cable being damaged. The cable itself is likely to have had rodent protection in the form of a glass yarn wrapped around - it doesn't stop the rats chewing the cable in the first place but is designed to stop them reaching the inner tube and the fibres themselves... but similarly, it may be that over time they can work their way through and damage the inner layers. Another possibility is that the point of connection failed. Joints and terminations are always going to be the weakest point in a circuit and terminating fibres is a tricky and delicate business - far more so than a standard copper cable.

Whatever the issue, contractors worked hard to get the fibre optic cable in question repaired and running again - with the data feed up on screens once more (after a system reboot) at around 5pm. The positive news was that once the data feed was restored it was relatively quick for business as usual to return and, luckily, none of the critical systems were affected - air traffic control continued to receive the information on flight movements, airfield lighting continued to receive power (these would be on different systems with back-ups in the event of failure). What it does do though is flag how, in our digital age of instant access information, a single length of cable can be key to the daily operations of such a major infrastructure service.