All aboard the fastest trains in the world 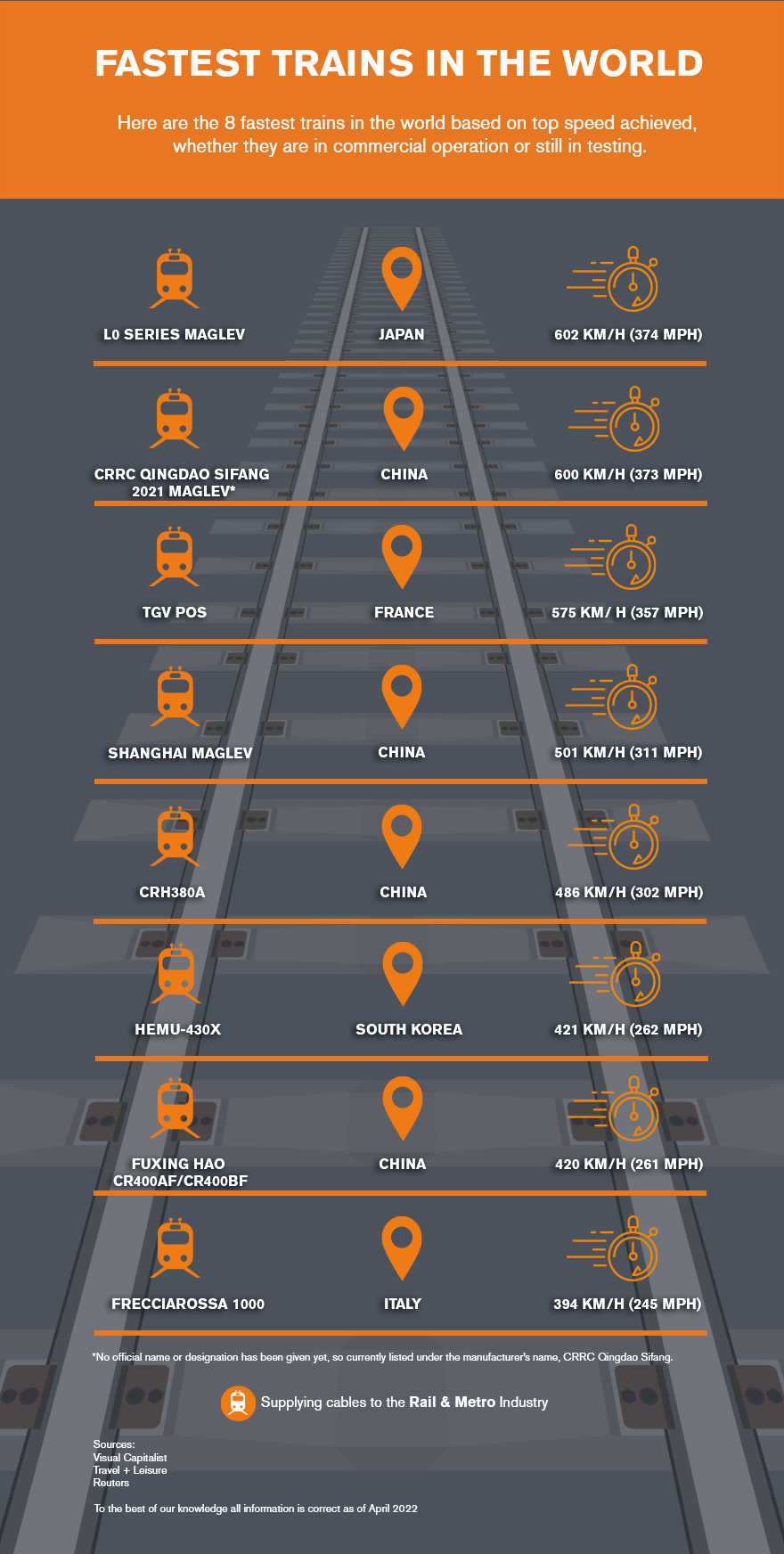 So, what does it take to be among the elite of high-speed rail travel? There’s no defining standard for high-speed rail, but there is an expectation that current lines are should reach more than 200km/h (124 mph) and future installations will top 250km/h (155mph).

The trains below gain their place on the list based on top speed achieved, whether they are in commercial operation or still in testing.

As of March 2022, the Japanese L0 Series Maglev is the fastest train, reaching a top speed of 602km/h (374mph) although it’s not yet in full commercial operation. Maglev technology uses electro-magnetic force, with the train "levitating" above the track – there’s no physical contact between the train and rail track.

Also in final trial stage is the Chinese CRRC Qingdao Sifang 2021 Maglev, sitting just behind the L0 Series Maglev by hitting a high speed of 600km/h. Train technology is also expected to include 5G Wi-Fi connectivity and provide wireless charging options for travellers.

Putting this speed into context, it takes just under 2.5 hours to fly the 1,000km between Beijing and Shanghai (a 10hrs train journey by conventional rail). The CRRC would complete the journey in just over 3 hours, giving a real alternative to air travel between these two major cities (not to mention the time saved through not having to check-in, taxi on runways etc).

The fastest train in commercial operation is the French TGV POS. On 3rd April 2007 is set a record speed of 575km/h (357mph) using both power cars of the TGV POS trainset. Given it was the first time that double-decker cars were used at such a high-speed, the carriages were transformed into a laboratory for the occasion so that technicians could gather data for analysis.

The fastest train in commercial operation using maglev technology is the Shanghai Maglev which achieved its record 501km/h (311mph) speed back in November 2003. As a commercial vehicle, the top operational speed is restricted to 431km/h (268 mph), hovering along the frictionless rail.

South Korea have a place on the list with the HEMU-430X which reached a top speed of 421.4km/h (262mph) back in March 2013 - that said, it was expected to reach 430km/h! South Korea joins France, Japan and China as the fourth country to develop a train that can surpass 420km/h. The HEMU-430X is a faster and bigger successor to the country’s first domestic high-speed train the KTX-Sancheon which had a top speed of 305km/h (190mph).

China’s last entry on the high speed list is the affectionately named ‘Dolphin Blue’ CR400AF and ‘Golden Phoenix’ CR400BF which can both hit high speeds of 420km/h (261mph). On a journey between Beijing South and Shanghai Hongqiao stations that would take a conventional train around 10 hours to complete, these trains take only 4hours 18 minutes.

Whilst not quite tipping over into the elite 420km/h club, the Italian Frecciarossa 1000 train has been speed tested to 400km/h, and is reported to hit a top record speed of 393.8km/h (245mph) whilst travelling along the Torino-Milano high speed line. It’s the first high-speed train to have gained an Environmental Product Declaration (EPD) which shows the environmental performance or impact of any product or material over its lifetime.

Interestingly, whilst many would think of high-speed trains as simply a benefit for passenger travel, many countries have expanded operations to include a freight services too, which can play a part in the reduction of carbon emissions where goods are transported long distances.

Maglev networks are seen as the future of travel in many countries, although barriers to entry include incompatibility with existing rail track infrastructure and high associated costs. As a global leader in high-speed rail, China has used the maglev technology for nearly two decades but it’s still on a limited scale.

Who will be the next country to break into that exclusive 420km/h club?