How are electrical cables tested for compliance?

Electrical cables are tested for compliance against parameters which have been designed to determine their particular suitability. These tests are incorporated into a wider schedule of tests in the applicable cable standard including those on the components of the cable as well as the complete cable. These tests include electrical tests, mechanical tests and chemical tests.

A number of tests on electrical cables are conducted during the manufacturing process, described as non-destructive tests such as tests for absence of faults, voltage testing and overall dimension tests. Other tests require more invasive destructive testing on samples, such as tensile strength and elongation testing, vertical flame testing, acid gas emission tests, and impact tests at cold temperature. 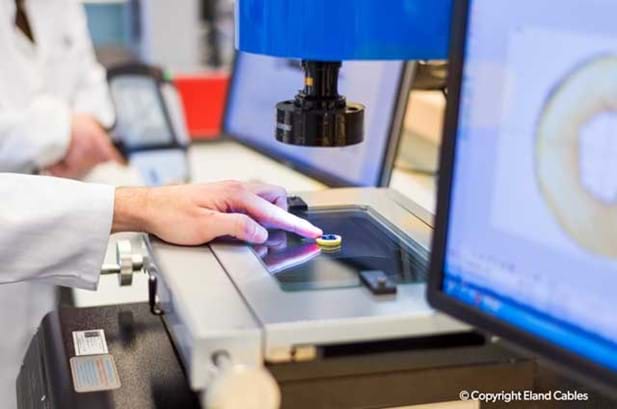 Electrical cables are also subject to various ageing tests to simulate how the cables are likely to perform over time, such as air ageing, compatibility testing, continuous flexing tests and UV stability tests.

What are electrical cable type tests?

Type tests are predominately destructive tests, conducted to determine if the cable construction and materials are compliant with standard specifications. Type tests are only required to be done once and are generally not repeated...

What are electrical cable routine tests?

Routine tests are tests which are conducted on each batch of cable and required to confirm ongoing conformity. Routine tests may differ from one cable type to the next...

What is a spark test?

A spark test is an inline voltage test used either during cable manufacturing or during a rewinding processes...