Going in circles with the endless runway 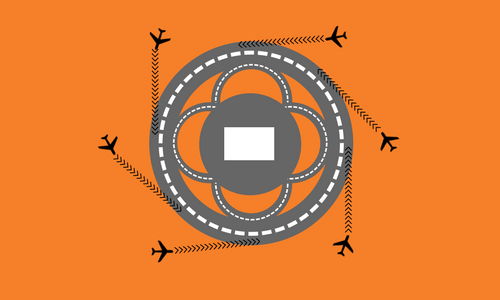 Circular runways: novel, radical, and potentially the solution to airport capacity shortages? Recently, the BBC reported on a proposed concept for an endless runway, with the main idea being to help manage growing air traffic demands and get around the physical constraints airports and current runway operations face. Many people are sceptical of the idea, and experts are divided on the topic over safety and practicality concerns.

The Endless Runway project comes from Aviation expert Henk Hesselink of the Netherlands Aerospace Centre. Hesselink has been working on the idea for years, and purports that an endless runway could be the solution to several concerns facing airports today. Having “one” runway that in good conditions can handle the traffic of three or four could add additional capacity to airports, while in addition reduce issues with wake-vortex separation and cross- and tailwind limits, both of which make it hard to improve performance of conventional airport configurations. His self-proclaimed radical and novel approach could also have sustainability benefits by reducing fuel burn, and decreasing the space that airports occupy. The circular runway would be approximately 9.6km2, which sounds huge, but when you compare it to Heathrow’s two-runway airport that occupies 12.27km2, it is actually quite compact.

One major concern is of course, safety. Looking beyond the additional difficulty faced by pilots landing not only while turning, but also on a curve given the banked nature of the runway, there is also questions around how a circular runway would change the infrastructure that’s currently in place, such as airfield lighting systems. The engineers behind the idea propose that aircraft could take off and land from multiple positions around the runway, aiming for optimal positioning to avoid cross-winds that can make landings more difficult. But this raises the question of precision guidance systems and visual aid lighting, such as approach lighting. Currently, runways have a series of approach lights at either end of the runway thresholds to help pilots navigate and find the runway at night and in sub-optimal situations, such as fog or other weather conditions. These are common delay-causers that an airport can equip for with advanced ground surface movement guidance systems.

At a proposed diameter of 3-4km, equivalent in length to three straight runways, size is another concern. If the threshold of the circular runway is theoretically the entire circle, would this require approach lights to circle the entire runway, in addition to the runway lighting itself? This would require extensive lengths of cable to connect everything and immense amounts of power. Hasselink has several suggestions for critical guidance systems, including movable systems that could function on a rail-track, though he has admitted this is quite farfetched. He says these systems would most likely need to be reconsidered, and completely new ways of guiding aircraft examined.

Despite the idea’s flaws and ambitious nature, a circular runway is actually not a new concept. Almost 100 years ago, a circular runway that perched atop skyscrapers appeared in Popular Science Monthly. Though there are certainly has some kinks to work out, concepts like this can get us thinking about issues facing aviation today and lead to further ideas that can take us into the future.