What are the respective benefits of using copper vs aluminium conductors?

Copper and aluminium are most frequently used as the electrical conductors in electrical cables due to their low resistance and excellent conductivity. These metals are both ductile and relatively resistant to corrosion, but they also have different properties which make them useful for various applications. Copper is the most conductive of the two metals, in fact of the commonly found pure metals, only silver is more conductive but it is considerably more expensive and not as strong.

Copper is determined as the standard for electrical conductivity - the International Annealed Copper Standard (IACS) with a copper resistivity of 1.724µΩcm at 20°C is assigned the 100% value. The addition of impurities or the work hardening of the copper through drawing down will adversely affect the conductivity of the copper. Whilst copper alloys are sometimes produced to improve the hardness of the copper where ductility is not desired, or to enhance the tensile strength, flex endurance and temperature resistance, the consequence of these additional alloying materials is to decrease the conductivity.

Aluminium is abundantly available and offers a cheaper alternative to copper for conductors. The demand for copper is variable and the price fluctuates considerably whereas the price of aluminium is much more stable. Whilst an aluminium conductor is only about 61% as conductive as the same sized copper conductor it is also three times lighter in weight which makes it much easier to handle. For this reason aluminium finds favour in large size cables and cables for overhead power distribution. 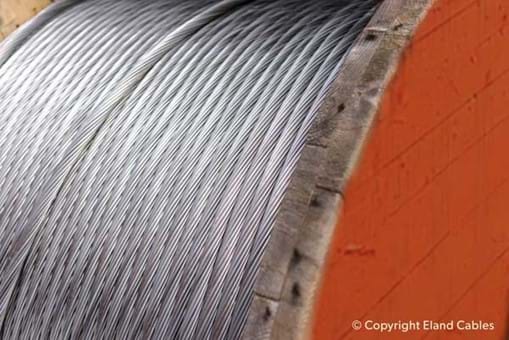 The difference in the conductivity means that a much larger size aluminium conductor needs to be used to match the conductivity of the equivalent copper conductor. Using a larger size conductor has the add-on effect of requiring a greater amount of insulation material to adequately cover the conductor and the extra cross-sectional size of the cable may be restrictive in certain applications.

In some cases copper-clad aluminium conductors consisting of an aluminium core with a heavy skin of copper bonded to the aluminium can be used. Whilst not in widespread use, this conductor type does combine the advantages of the lighter weight aluminium with the more conductive copper. The ductility is however that of aluminium and not the improved performance of copper. This conductor type has found some favour with coaxial cables as a lightweight centre conductor. The lighter weight wire allows the use of lower density dielectric material for better attenuation.